You are here: Home / Archives for Exercise

A recently published study proved something we all know to be true…the more active you are…the healthier you will be. This study was done in Seattle and was actually looking at the effect of exercise on markers of breast cancer risk. But they also noted something else.

They found that women (average age of 61) who particpated in a moderate exercise program (most often walking for 45 minutes 3 days a week) were shown to have less colds that those who did did not particpate. Note that they are talking about a moderate level of exercise, as other studies have shown that excessive, exhaustive exercise can deplete immune function and increase the risk of colds and other infections.

There are so many benefits to exercise…this just adds to the list! Dust of cobwebs off your sneakers and go enjoy a long walk. While your at it, make sure you kick up a few leaves.

In fact, mundane physical activity like household chores may count.Sound too good to be true? That’s the finding from the National Institute on Aging’s Todd Manini, PhD, and colleagues.

“Simply expending energy through any activity may influence survival in older adults,” they write in The Journal of the American Medical Association‘s July 12 issue.

Does their theory hold water? Perhaps, says a journal editorial. Manini’s finding on longevity motion is “provocative and if documented by future research would have major implications for physical activity recommendations,” the editorialists write.

“What is the most important thing I can do to protect my health/improve my health?”

I’ve been asked this many times and my answer is always the same.

Change your eating habits and get moving.

Article after article points out the power even a little exercise can have on your health!

You don’t need to run a marathon, ride the STP (Seattle-to-Portland bike ride), or spend the majority of every day at the gym in order to see the benefits of exercise.

Yes, we are all busy – but as I remind myself…if I don’t take care of me, what will tomorrow bring?

For further reading, here is a link to the article mentioned above. But when you are done reading…go for that walk! 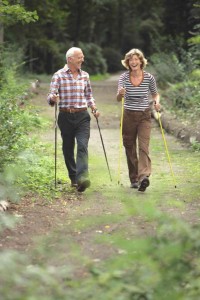 The study included 29 men and 16 women, aged 35 to 50, who’d had meniscus repair within the previous three to five years. The study volunteers were randomly assigned to either an exercise group or a control group.

Those in the exercise group took part in a supervised program of aerobic and weight-bearing exercise for one hour, three times a week for four months. At the start of the study, both groups had MRI scans to evaluate their knee cartilage. They also answered questions about their knee pain and stiffness, and their general level of activity.

At the end of the study, many people in the exercise group reported gains in physical activity and functional performance, which were confirmed using aerobic capacity and stamina tests. MRI scans revealed positive changes in the strength and elasticity of their knee cartilage.

“This study shows compositional changes in adult joint cartilage as a result of increased exercise, which confirms the observations made in prior animal studies but has not been previously shown in humans,” researcher Dr. Leif Dahlberg said in a prepared statement.

“The changes imply that human cartilage responds to physiologic loading in a way similar to that exhibited by muscle and bone, and that previously established positive symptomatic effects of exercise in patients with OA may occur in parallel or even be caused by improved cartilage properties,” Dahlberg said.

He and his co-author concluded: “Exercise may have important implications for disease prevention in patients at risk of developing knee OA.”

The American Medical Association has more about knee OA.